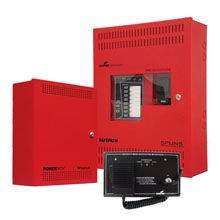 Both systems allow for one-step notification through the transmission of voice messaging, text messaging and automated voice-instructed messaging through a campus paging system. Such messaging will notify faculty, the student body and first responders in the event of an emergency situation.

The AMS emergency notification system allows simultaneous delivery of voice and text messages to tens of thousands of people within minutes. Through one phone call, the system instantaneously launches a message to devices such as home phones, cell phones, pagers, e-mail inboxes and PDAs. In addition to colleges and universities, the AMS can be employed by governments for quick dissemination of emergency information to large sections of their populations.

AMS is centered on a Web-based user interface that can be accessed anywhere via the Internet. This makes it easy to administer a messaging session, especially when dealing with an emergency. In addition, the AMS has multiple message delivery modes, such as pre-recorded message delivery and text-to-speech voice message delivery. The system also allows for on-the-fly delivery of messages, in which AMS will instantaneously deliver a recorded message to all members of a specified group.

The SAFEPATH SP40S is another university notification system now available from Telcom Data. The SP40/S comes standard with an on-board digital voice messaging system with eight standard messages, a hand-held microphone, power supply/battery charger and many additional features. In addition to functioning as an emergency notification system, the SP40S can function as an evacuation system, paging system and background music system. The SP40S can also be connected to pagers for private alerting of emergency situations.