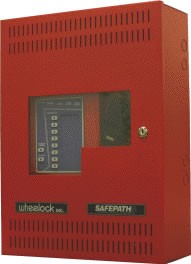 Need a free design and quote on an Emergency Notification System?There are many emergencies that industrial and office buildings encounter including fire, medical, security, chemical spills, injuries and severe weather. The Occupational Health and Safety Administration (OSHA) requires employers to use an alarm system to alert employees of necessary emergency action (OSHA) 1910.165. Telcom & Data is pleased to introduce Cooper/Wheelock’s SP40S SafePath system, an OSHA approved emergency evacuation product. Cooper/Wheelock SafePath products are used by Department Of Homeland Defense, the US Military, and have been written as the standard in many building and fire codes in the United States.

The SP40S is ideal for both small and large facilities. The SafePath System can be used for general phone paging, messaging, background music delivery as well as emergency voice evacuation. The system comes standard with an on-board digital voice messaging system with 8 standard messages, a hand-held microphone, and a power supply/battery charger. Because the system is OSHA 1910.165 compliant, it does not require reliability inspections every two months or the required spare parts inventory.

When Ricardo Trinidad, President of Telcom & Data, was asked about the SP40S SafePath system, he said, “The last thing a business wants is to be unprepared for emergency situations or be held liable for failing to meet safety regulations. This SafePath system ensures businesses meet the highest safety standards.”